Approximately, four to five million Americans are bitten by dogs every year. Of this number, approximately 800,000 Americans seek medical attention for these bites while only 0.0002 of these attacks are fatal. Dog bites are also one of the most popular reasons why children visit the emergency room. Since fatal dog attacks and dog bite injuries are within a State’s public health, safety, and welfare police power standard, 39 states and numerous municipalities currently have statutes and ordinances that regulate dogs believed to exhibit or engage in violent behaviors. These statutes and ordinances are known as Dangerous Dog laws.

While statutes differ from state to state and municipality to municipality, these laws typically, although not always, have the following components: (1) a definitional section; (2) a procedural section for declaring a dog dangerous, vicious, potentially dangerous, or a nuisance; (3) restrictions placed on dogs classified as dangerous, vicious, or potentially dangerous; and (4) penalties for violating those restrictions, including provisions for when a dog, previously determined to be dangerous, attacks again.

Actions that Classify a Dog as Dangerous

The definition of “dangerous dog” usually refers to the act or actions of a dog that puts the public or other animals at risk for injury or death. However, states like Michigan and South Carolina may also allow other animals to be declared dangerous as well. The following list demonstrates some of the categorizations that different states have used to define a dangerous dog:

A few states, like Ohio, New Hampshire, and Massachusetts, include an even lower classification, known as a nuisance dog, in their Dangerous Dog statutes. In Ohio, for instance, a nuisance dog is classified below the state’s dangerous and vicious dog classifications and is defined as a dog that—without provocation and while off the premises of its owner, keeper, or harbor—has chased or approached a person in either a menacing fashion or an apparent attitude of attack or has attempted to bite or otherwise endanger a person. In New Hampshire, a nuisance dog is either a dog that is at large; a dog that barks for more than a half hour or during the night; a dog that digs, scratches, or excretes, or causes waste or garbage to be scattered on property other than its owner's; or a dog that is a female in heat and at large. New Hampshire also has a menace dog classification, which is a dog that chases vehicles or growls, snaps at, runs after, or chases any person or persons not on the premises of the owner or keeper. Finally, in Massachusetts, a nuisance dog is a dog that, by excessive barking or other disturbance, is a source of annoyance to a sick person residing in the vicinity; that by excessive barking, causing damage or other interference, is a dog a reasonable person would find disruptive to one's quiet and peaceful enjoyment; or that has threatened or attacked livestock, a domestic animal or a person, but was not a grossly disproportionate reaction under the circumstances.

In addition to providing a definitional section, statutes will typically provide a procedural section for determining whether a dog is dangerous, vicious, or potentially dangerous. These procedures may include, but not always:

A state, such as Arizona, may also require a separate hearing for euthanasia proceedings. Additionally, instead of using a hearing to make a determination, a state, like Georgia, may give a local authority the power to declare a dog dangerous and then give the dog's owner an opportunity to contest that determination at a hearing.

The procedure for declaring a dog dangerous often provides the biggest litigation concerns regarding a dog owner's constitutional right to procedural due process. The Due Process Clause of the U.S. Constitution’s 5th and 14th Amendments provide that government may not deprive its citizens of “life, liberty, or property” without the due process of law. Since dogs are treated as an owner’s property, the owner is entitled to protection under the US constitution. Procedural due process guarantees a person the right to notice that an action has been taken against him or her and the right to be heard in a meaningful, fair, and timely manner. Thus, some procedural due process concerns that may arise in Dangerous Dog law include: failure to provide notice to the owner of a hearing or a determination, failure to provide the owner with an opportunity to contest the determination, or failure to provide guidelines or specific findings to declare a dog as dangerous. Although it should be noted that the degree of due process afforded in civil and criminal proceedings may be more than what is afforded in administrative hearings.

Consequences of a Determination 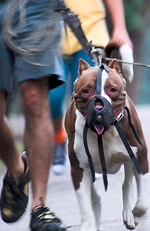 Outside of Dangerous Dog laws, a dog who attacks a person may subject the owner to common law claims such as the one-bite rule, negligence, or strict liability. Outside of legal penalties, when a dog is classified as dangerous, an owner may also face trouble getting his or her home insured or finding rental coverage. For instance, an insurer may charge owners of dangerous dogs a higher rate, exclude their dog from liability coverage, or turn the owner down for coverage all together.

Some statutes also have provisions detailing what happens when a dangerous dog engages again in the behavior that had caused the dog to be classified in the first place. In North Carolina, for example, a potentially dangerous classification will subject a dog to a dangerous dog classification if that dog engages in the behavior that originally classified him or her as potentially dangerous. Furthermore, in New York, the owner of a dangerous dog who, through any act or omission, negligently permits his or her dog to bite a person causing serious physical injury will be guilty of a misdemeanor punishable by up to $3,000, by imprisonment of up to 90 days, or by both.

As mentioned in the introduction, Dangerous Dog laws are also be created by a municipal ordinance, so it is suggested to look at a municipality's Dangerous Dog ordinance as well as the state's statute when researching Dangerous Dog laws. A Dangerous Dog statute may give a state's local government the power to create its own laws to regulate dangerous dogs. In fact, Washington only allows potentially dangerous dogs to be regulated by municipal ordinance. Often, these ordinances will use similar language to the state’s statute. Other times local ordinances are required to be stricter than the state law, as is the case in Texas. A state statute may also limit the strictness of a municipality’s Dangerous Dog ordinance. For instance, in Virginia, the governing body of any locality may enact an ordinance parallel to this statute regulating vicious dogs, but may not No locality impose a felony penalty for violation of those ordinances. Furthermore, California allows municipalities to impose a more restrictive program to control potentially dangerous or vicious dogs, provided that no program shall regulate these dogs in a manner that is specific as to breed. Colorado and Florida have similar provisions. The California, Colorado, and Florida provisions are related, but different from, another legal system known as Breed Specific Legislation (BSL). Whereas Dangerous Dog laws place restrictions on dogs based on behavior, BSL laws place restrictions on dogs based on breed. A municipal ordinance, however, may sometimes intertwine the two laws. For instance, in Pine Bluffs, Arkansas and Covington, Kentucky, a person who owns a pit bull must automatically comply with Dangerous/Vicious Dog restrictions; otherwise, a person is prohibited from owning a pit bull within either city’s limits.  Note that some states, like Virginia and South Carolina, disallow this practice of declaring a dog dangerous based on breed, while others, like Connecticut and Illinois, prohibit local government from creating BSL all together.

Dangerous Dog laws are not without their critics. The use of such phrases as “menacing fashion” or in “an apparent attitude of attack” have been criticized as being too subjective and that they classify dogs as dangerous that were merely engaging in normal dog behaviors. A related criticism argues that local governments are over classifying dogs as dangerous because they fear being held liable if the dog attacks someone in the future.

Perhaps in response to the criticism surrounding Dangerous Dog laws, litigation surrounding Dangerous Dog laws has caught on to some recent trends regarding animals, namely giving dogs more legal rights. For instance, in 2012, in a highly unusual move, a pit bull, that had attacked a five-year-old and was facing euthanization, was appointed legal representation. The appointment was unusual because, being classified as property, dogs are typically thought of as lacking a capacity for the legal right to participate in proceedings against them. Whether more dogs facing dangerous dog classifications will be appointed attorneys remains to be seen.