Animals in China Law and Society

Peek Inside Animals in China Law and Society.pdf (188.51 KB) 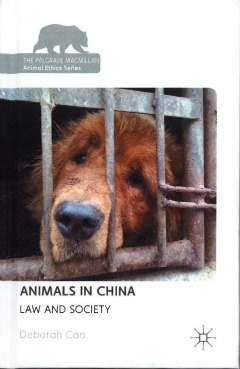 With the rise of China comes the potential retreat and demise of some animal species. In recent years, with the growing awareness of animal issues in China, animal cruelty and animal protection have been attracting more attention and generating public debates. Animals in China: Law and Society examines the laws and regulatory framework for animal protection in contemporary China in its social and cultural contexts, and is the first comprehensive research monograph on the subject. It covers all key areas of the debate including wildlife, companion animals, fur animals, lab animals and other working animals. It is shown that despite the importance of animals in Chinese culture, animal suffering has not been a topic of general concern, often dismissed as being bourgeois or frivolous. However, this is beginning to change. Here, Cao documents that animal protection in China is a nascent social movement, with attitudes slowly changing through a bottom-up, grass-roots campaign which has gained traction via the internet and social media.

For more and to order the book, see Palgrave Macmillan publishers at http://www.palgrave.com/page/detail/animals-in-china-deborah-cao/?K=9781137408013