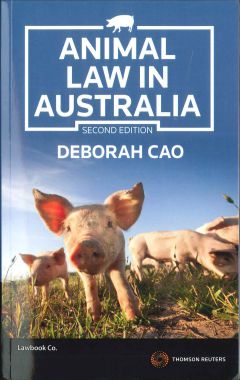 Animal law continues to grow as a legitimate branch of legal studies, with animal law courses increasing in popularity across Australian universities.

This edition contains updated material on animal welfare studies, animal trials and new cases from the United States regarding the legal personhood of animals. Legislation has been updated throughout, including discussion of provisions on cruelty to farm animals added to the Animal Welfare Act 1992 (ACT). The updated bibliography ensures students are aware of the most significant developments in the discourse relating to animal welfare.

Other amendments include the following:

For more and to order the book, go to Thomson Reuters Australia at http://legal.thomsonreuters.com.au/animal-law-in-australia-2e/productdetail/122993